The history of this beautiful property dates back to the earliest days of our country. It was the second of three forges along the Conestoga River in Caernarvon Township, and the fourth forge constructed in Lancaster County. 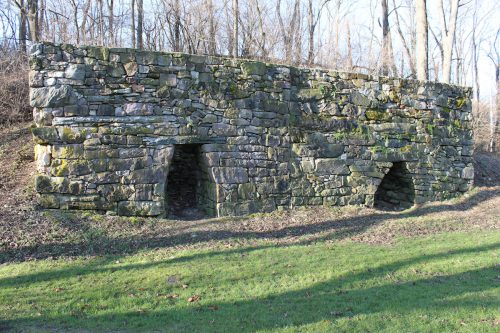 The story of the owners of Poole Forge is an example of the interrelationships through the marriage of the wealthy ironmasters’ families. In 1775, James Old, a Welshman, and his wife Margaretta Davies, daughter of ironmaster Gabriel Davies, bought the property. Cyrus Jacobs, married to Old’s daughter Margaretta, bought the property in 1799. Jacobs also owned the nearby Spring Grove Forge and was one of the wealthiest iron makers in Lancaster County.

Ann Coleman, daughter of ironmaster Robert Coleman and granddaughter of James Old, was introduced to James Buchanan at a party at Poole Forge. Unfortunately, her father ended their romance, and Ann died of a broken heart, or so the legend says. In 1830, Old’s grandson Hanson Bentley Jacobs inherited the property. Hanson Jacobs married Catharine Jenkins, daughter of the owners of Windsor Forge, in 1836. They lived at Poole Forge until 1850 when this method of iron production ended as it was no longer profitable.

Historic Poole Forge is a good illustration of the hub of a late 18th and early 19th-century iron forge plantation. At one time there were 38 buddings on the grounds which consisted of 472 acres. The forge hammers and a plaque mark the site of the forge building not too far from the mansion house. The forge was in a large one-story building.

There were twin race courses for the two water wheels to move each of the 500-pound forge hammers against the anvils to refine the pig iron into charcoal blooms and bar iron. 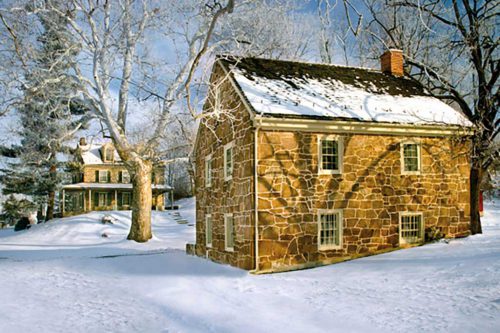 The ironmaster’s Mansion dominates the north hillside. The “L” shaped plan results from construction in two distinct sections in different time periods. Secondary sources state that the northern section dates before 1779, which corresponds with the time when the property had a grist mill. The section to the south, or front of the house, was built between 1779 and 1815.

Both sections are two-and-one-half stories in height with intersecting gable roofs. They are constructed of brownstone and ironstone laid in a random coursing with dark brownstone quo1n1ng at the corners. The newer section has a higher roofline, a result of the higher ceilings inside. 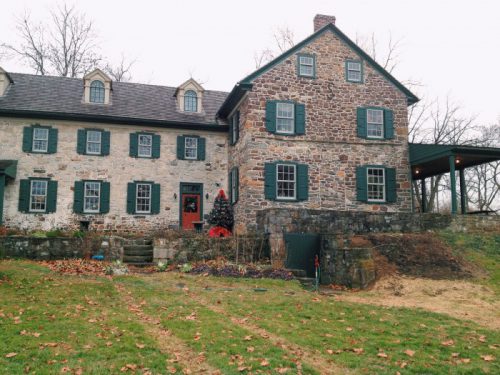 A 20th-century porch stretches across the front facade and extends to the west. The paneled door surround and four-pane transom remain from a late 18th century or early 19th-century door, and the 20th-century Dutch door has a nine pane top panel and a crossbuck lower panel. There is evidence that another doorway was made into a window. The windows are double-hung wood windows with six-over-six sashes. The wood frames are pegged together with heavy wood sills and have a molding surrounding the frames.

The roof of the south elevation has two over-scaled, gable-roofed dormers sided with clapboards. The semi-circular headed, double-hung wood windows have nine-over-six sashes. The top panes arch and cross at the center. The dormers’ cornices and windows have heavily molded Federal-style embellishments. There is a small keystone at the center and moldings form a broken pediment above the arched window.

The two-bay gable end of the south section has the ghost of a doorway between the two windows on the lower floor. On the inside of that wall, there is now a fireplace. A projecting stone flashing course between the first and second floors indicates a missing pent eave or porch roof. A historical photo shows a porch in this location. The third level of the gable end has two, double-hung, three-over-six pane windows.

Both sections have molded box cornices of similar, but not matching, design. The moldings on the south section have deeper profiles. A gouge carved, frieze board with a Federal period dot pattern in contiguous arches is under the west cornice of the north section. The frieze board under the cornice of the front section has a similar Federal-era dot pattern applied in a sine wave, not the contiguous arch, pattern. 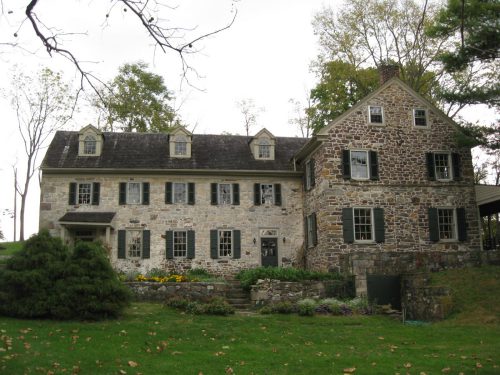 The “L” section is five bays wide and two bays deep. There are three double-hung, six-over-six windows between the two doors. The center window had once been a doorway. An original six-panel door with a four-pane transom is covered by a wooden porch of 20th-century construction in the north bay. Prior to 1990, the original door in the south bay had four large panes installed in the door over the two original panels. There is a four-pane transom above. A different plank molding applied around the outside of the original door frame suggests that this door and frame were originally in the center bay of this facade.

The three gable roof dormers have clapboard sides. These dormers are smaller than the dormers on the south elevation, but they have more elaborate Federal Style moldings. The windows themselves are nine lite wood casements with semi-circular fanlights above. A high relief, applied molding frames the arched fanlight. To either side, fluted moldings topped with a Greek key molding sit on a small molded cornice. Below the cornice, moldings were applied to form panels. The broken pediment is repeated above the window with another high relief molding applied under the dormer’s roof.

The second level of the “L” has five, double-hung, six-over-six windows in pegged wood frames with surround moldings. The second-floor shutters are all louvered. The first-floor windows have wooden paneled shutters, three panels in each. The shutters are of similar construction in both sections of the building. For the most part, they retain their drive-in pintels. The holdbacks and rings differ from one section to the other but were all driven into the sills. 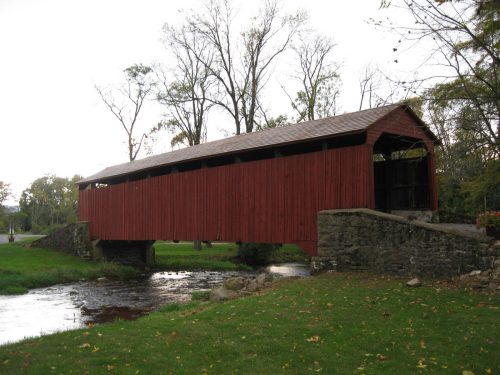 Historic Poole Forge was placed on the National Register of Historic Places in 1993 because it is an excellent representation of an iron making complex from the late 18th and early 19th centuries.

In order to preserve the historical importance of this once vibrant iron plantation, Caernarvon Township purchased the 26-acre property in 2005 to provide a park facility for the community.

Historic Poole Forge, Inc. is a nonprofit, primarily all-volunteer organization. It is dedicated to revitalizing and restoring the beauty of the property while protecting its historical integrity.

Historic Poole Forge, Inc., in partnership with Caernarvon Township, has not only enhanced the historic structures on the property but has provided an active and enjoyable park for the community. The park is open from dawn to dusk year-round.

This is an excerpt from the Historic Preservation Trust of Lancaster County’s 2012 Architectural History Tour Hidden Treasures 1 book.