The 1923 Ephrata National Bank is one of three Ephrata buildings designed by Lancaster Architect C. Emlen Urban. You can find “The Grand Lady of Main Street” at 31 East Main Street, Ephrata, Pa. 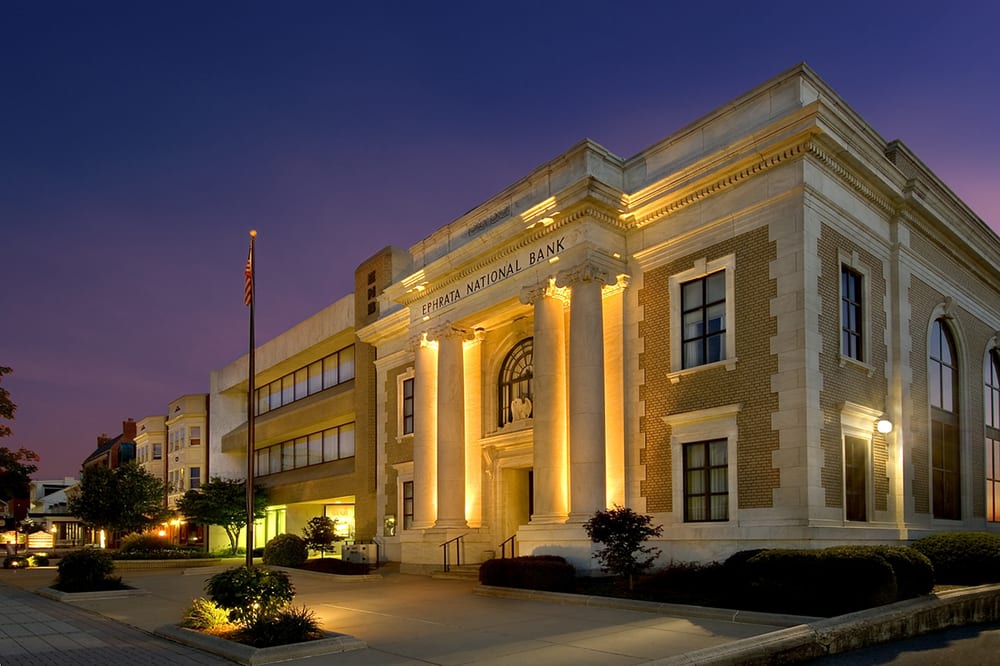 In late 1921, The Ephrata National Bank hired C. Emlen Urban to develop plans for a bank building on the former Sener Lumber and Coal yard site. William Sener was the first president of the bank and also held the largest block of shares.

Warfel Construction was hired to construct the facility, and the Mosler Safe Company was engaged in providing the walk in vault. The cost of the project was estimated at $240,000. Construction began in 1923 and was completed in July of 1925.

The building was constructed of buff-colored brick and graced with large Vermont Imperial Danby Marble blocks. Urban utilized Beaux-Arts styling, incorporating high styling with a balance of design and symmetry. 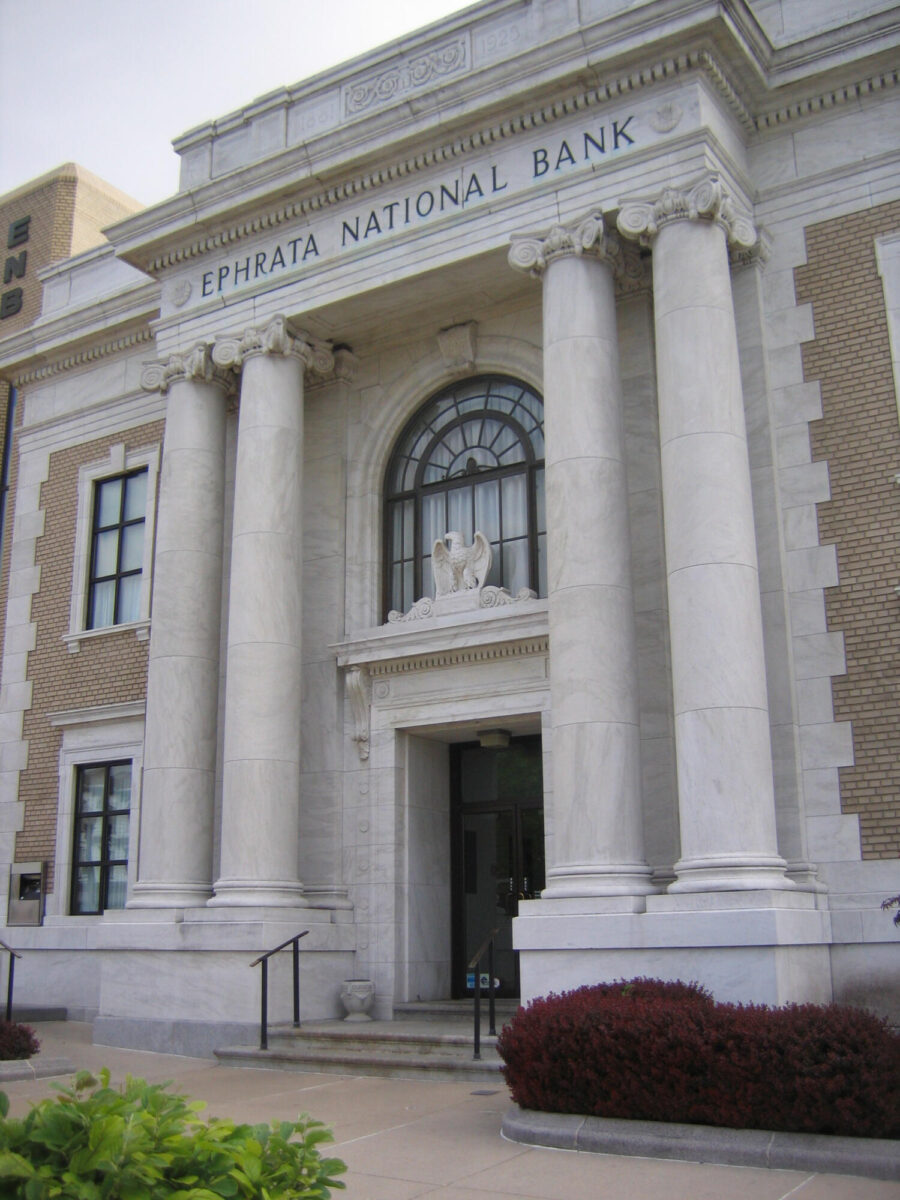 The interior of the bank is beautifully appointed. The focal point of the main banking floor is its impressive vault. Plaster dentil moldings with gold leafing detailed the ceiling. American walnut wood trim was used throughout. Crema marfil marble from Spain was used on the sidewalls and teller line. The brass and bronze wall sconces, chandeliers, check-writing desks, and door backplates are still used today. The original clock is positioned above the vault.

The vault is a 4-time clock movement vault. Most vaults only have three. The round door weighs 17 tons, with the door on frame weighing 26 tons. The vault was constructed first. Then the door was carried from the Ephrata Train Station by ten mules on a steel-wheeled cart to its current location. 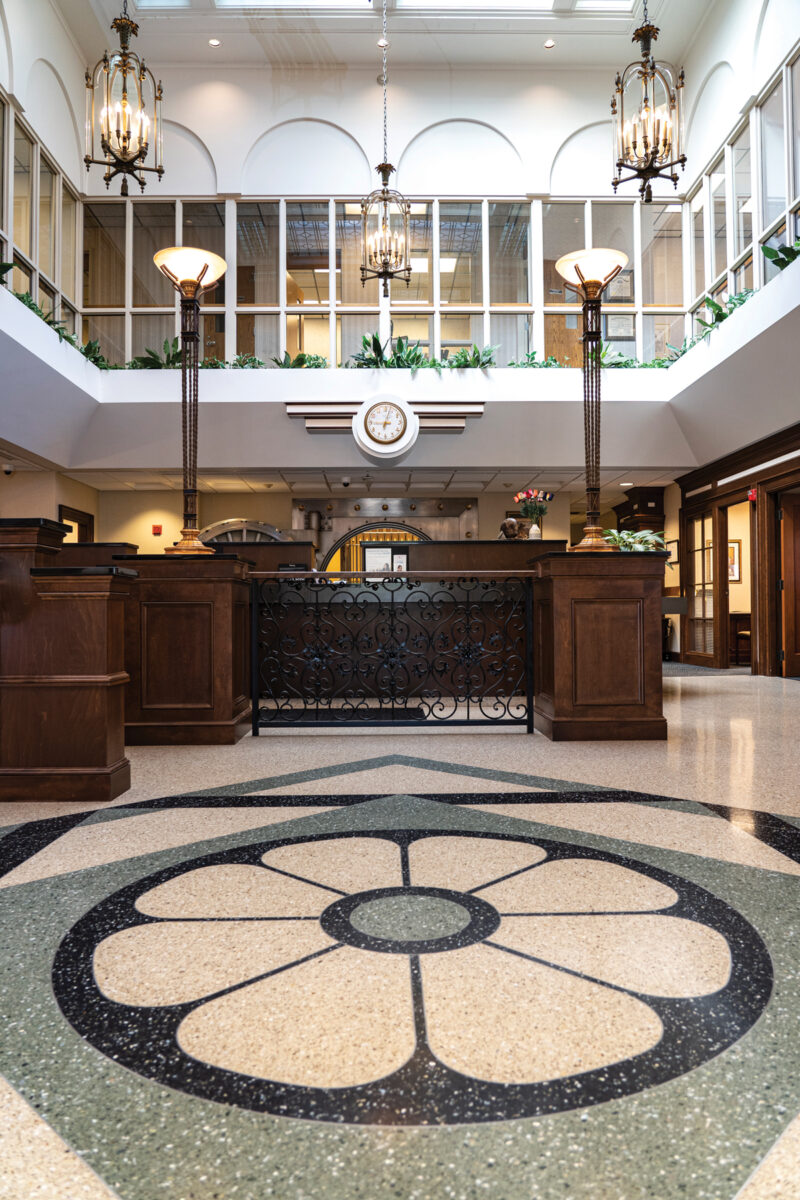 The building’s second floor consisted of a mezzanine, which overlooked the banking floor, and the bank’s board room had a working fireplace and walls lined with American walnut.

As in many projects, Urban installed a skylight comprised of stained glass panels designed to complement the interior. The original “pyramid” wired glass and copper roof cover still protects the interior. The significance of the building was realized early on. The Ephrata Review called it “a beautiful, costly, and complete banking house” at the formal grand opening on Saturday, July 11, 1925, when more than 10,000 people toured and inspected the building from 9:00 am until 9:00 pm. Over 8,000 roses, small coin banks, and a booklet providing the bank’s history were distributed to the visitors. 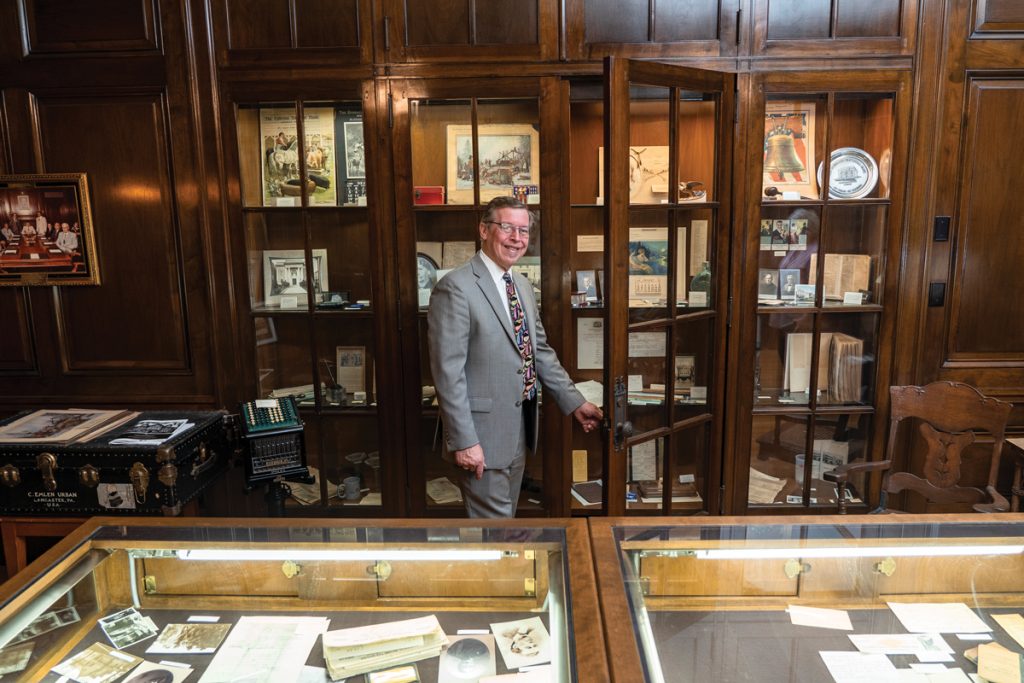 Today, the Bank operates regular hours as a banking facility serving the needs of the same public as it did in its inception. To keep the building current with the latest banking trends, it has been renovated over the years. The first renovation in 1962 was in conjunction with an addition creating more space. 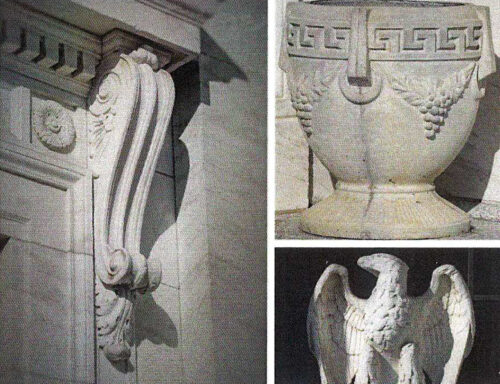 In 1981, an annex was added to join the original building with the 1960 addition. This renovation changed much of the original layout. The goal of the 2011 renovation was to keep the building current and functional but to bring back the “feel” of the original style. This was very effective. Private offices were increased, a terrazzo floor was laid, and extensive millwork was added to embellish the style.

The infrastructure, security, lighting, HVAC, electrical systems were also upgraded. The design to build firm, R.E. Lamb, worked in conjunction with the Bank’s Director of Facilities, James G. Brown, to create a design that would showcase the Bank’s rich history and C. Emlen Urban’s original, timeless Beaux-Arts design. It is an excellent example of Urban’s credo to “to build strong and substantial.”

Here’s a video from ENB discussing their history. It features board member and ENB employee Jim Brown. 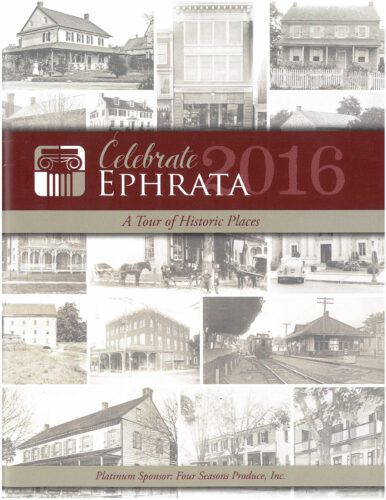 In 2016, the Historic Preservation Trust of Lancaster County hosted a guided tour of the historic and beautiful Ephrata, PA. The tour featured 30 historic sites, including the Connell and Andrew Baker Mansions, the Ephrata High School, the Ephrata Main Theater, the Lincoln House, Henry Miller Home and Tavern, and the Hackers Store Building, plus many other beautiful properties. Each property is featured in the book, along with a description of its history and architecture along with detailed photographs.

Click here to purchase a copy of the 38-page tour book today and enjoy learning about the exciting history and architecture of Ephrata, PA.