For more than 45 years, the prolific C. Emlen Urban created many of the historic landmarks that are fundamental to the beloved character of Lancaster City. In this post, we will examine Urban’s pair of mansions on West Chestnut Street at 624 and 632.

This pair of homes built between 1894 and 1896 are particularly attractive. Built at the same time, they were designed to be complimentary. Prominent architects of C. Emlen Urban’s generation often designed blocks of row homes. However, two single-family homes built side by side for two unrelated prominent families are rare. Both houses are a 2 1/2 story, three-bay design in the Chateauesque style. 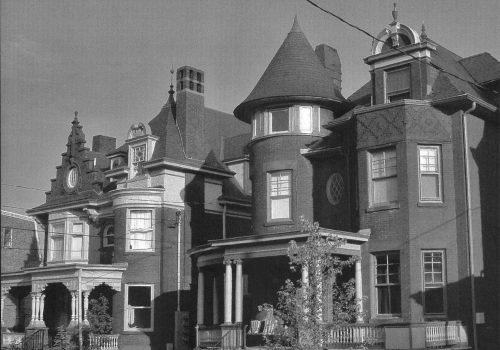 Buildings of this style have steeply pitched hipped (and sometimes gabled) roofs, topped by cresting or finials, and pierced by decorative gabled wall dormers. Chimneys are tall and have decorative corbelled tops. Another standout feature is a round tower topped by a conical roof. Entry doors often have round arches or a flattened arch with an ogee arch molding. Most examples of this rather rare style are found in a sophisticated urban setting or an estate. 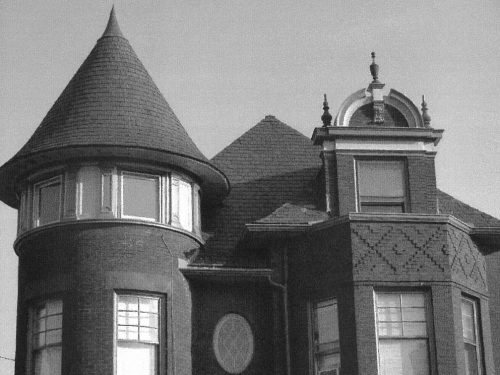 Both buildings fit the description almost to the letter. They are adorned with playful elements and well-considered details. Here Urban adapted a style most popular for ample sites with large surrounding lawns to a restricted city site. With no formal lawn or lengthy approach, Urban elevated the buildings and set them back from the street to create a more imposing presence and identify them (and their owners) as important.

After World War II, many of these treasures ended up an unrecognizable collection of small one-bedroom and studio apartments. Such was the fate of 632. Today, it remains a series of apartments with few clues as to the formerly gracious interior.

The center house shown directly below is 632 West Chestnut Street.

Curiously, what saved 624 was being converted into a boarding house. Small bathrooms were inserted without too much damage to the rooms, and a shared kitchen served the entire building. Today the building is divided into three large apartments that respect and preserve the interior spaces and details.

The center house shown directly below is 624 West Chestnut Street.

Menno Fry purchased the building lot at 624 in 1884 for $3,800. He was president of the M. M. Fry & Bro Tobacco Warehouse on Grant and Christian Streets. They had another warehouse in Landisville. In 1930, John S. Nissly and his wife bought the home. Nissly was a partner in Nissly and Schelling Painters on Market Street. Their descendent, Esther Nissly, inherited the house and converted it into a tourist home. The sign is still evident along the driveway.

Elmer Steigerwalt moved to his home in 1896. He worked in the family firm, M. F. Steigerwalt & Sons. They were dealers in flour and coal. Their offices were at 226 – 234 North Water Street and 128 East King Street. In 1940, the Zeta Beta Tau Fraternity owned the home. Eventually, the house became apartments. In I 966, Esther Nissly bought the property and managed the two neighboring homes as a tourist home.