For more than 45 years, the prolific C. Emlen Urban created many of the historic landmarks that are fundamental to the beloved character of Lancaster City. In this post, we will examine Urban’s 1888 Southern Market Center located at 100 South Queen Street. 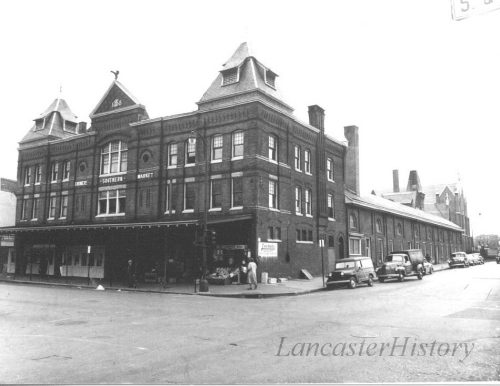 The 1888 Queen Anne style building is comprised of a three-story head house along South Queen Street and a two-story market house along West Vine Street. Anchored to the north and south by two towers, the symmetrical facade is divided into seven bays by way of brick pilasters. The tall decorative chimney, another hallmark of this style, is likely lower than when constructed initially.

Queen Anne style buildings are recognized for an exuberant use of materials, patterns, textures, and colors. This building is no exception. There is extensive brick corbelling at the cornice. A terra cotta “1888” is featured in the pediment of the center bay. The whimsical, full relief terra cotta ram and bullheads within the roundels at the third-floor level pay homage to the building’s original use as a farmers’ market. The brickwork detailing, the decorative brick or rusticated stone heads and sills on the 12-over- 1 1888 windows, and the projecting porch are other recognizable traits of this style.

The corner towers have pyramidal roofs and shed dormers. The detailed slate roof has an alternating square and fish scale patterns indicative of a Queen Anne style building. Finally, the iron finials depicting a lit torch point to the building’s Victorian-era influences. 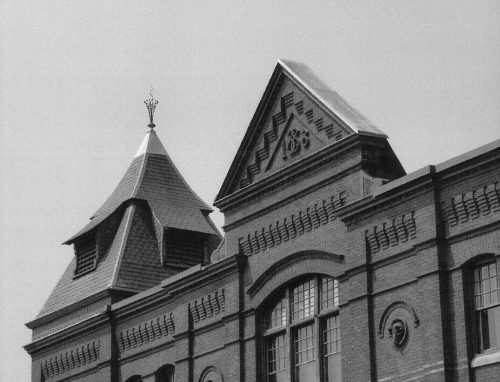 While utilitarian, the vast interior market space retained its elegance through the use of heavy timber, bowstring trusses, and cast iron support rods, which span the interior market floor. The impressive trusses are still visible within areas of the building. The Southern Market Company, a private corporation, began planning for this market house in 1883.

A December 1883 newspaper article reported on a meeting of directors presided over by Urban’s father. They sold stock in the company for $50 a share and did not begin construction until all the money was raised. The demolition of existing buildings started on April 1, 1888, and the completed market house was ready just five months later.

An August 1888 newspaper article stated that the market would be held every Wednesday and Saturday, “and the opening hour will be whenever the farmers feel like coming and opening. There will be no fixed time for opening. On Saturday afternoon, however, a four o’clock market will be held.”

Several components of the original building have changed. There was once a ten-room dwelling at the northeast corner at Vine Street and a four-room janitor’s dwelling on the southern side. Three basements with vaults extended under Queen Street. Three storerooms with separate cellars were meant to be rented for “huckstering,” or street peddling.

In 1951, the Southern Market House passed from private to public ownership when the City of Lancaster purchased the building. The goal was to convert the structure into a parking garage. That proposal was defeated in a 1953 public referendum.

In 1982, the basement space was converted to meeting rooms and a retail shop operated by a local craft guild. Craft items produced by guild members were given to the city as in-kind rent payments. The city closed the market in April 1986, and stand holders were accommodated at Central Market.