The history of Columbia Borough can be traced back to pre-historic times when Native Americans occupied the area known today as Columbia. The first European settlers in the area arrived in 1726. The families of three men, John Wright, Robert Barber, and Samuel Blunston, acquired tracts of land and established permanent homes. John Wright developed a ferry business in 1730, carrying goods and people across the Susquehanna River. Because the ferry business was located here, the name Wright’s Ferry was given to the settlement. Wright’s Ferry became well known throughout the Middle Colonies.

In 1788, Samuel Wright, the grandson of Wright’s Ferry founder John Wright, laid out 160 lots in what is now the central section of the Borough. Samuel called the town Columbia, naming it after Christopher Columbus. The growing importance of Columbia became evident in 1789 when the town narrowly missed being selected as the nation’s capital. Later, Columbia was considered as a site for the capital of Pennsylvania. Harrisburg was chosen because it was closer to the center of the state. 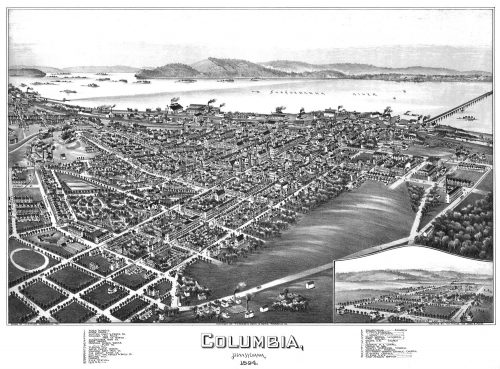 The 1800s was a period of rapid growth and prosperity for Columbia. The Borough was officially incorporated in 1814. During that same year, the first bridge across the Susquehanna River linking Columbia and York was completed. In 1830, the borough became the terminal of the first link of the Pennsylvania Canal system. An extensive canal basin was constructed at Columbia to facilitate the loading and unloading of canal barges. Later, the Pennsylvania Main Line Canal was built along the west shore of the Susquehanna River linking Wrightsville with the Chesapeake Bay. A low dam was built across the Susquehanna to facilitate the floating of canal barges across the river and to supply the canal system with water.

By 1834, some of the first rail cars reached the Borough via the Philadelphia and Columbia Railroad. The railroad shipped goods and people to and from Philadelphia. The goods were transferred on and off of canal barges in the canal basin. Other rail lines were soon added to the north and south of the Borough along the banks of the Susquehanna and across the river to Wrightsville, where the tracks joined those of the Baltimore and Susquehanna Railroad. In 1857, the Reading and Columbia Railroad was incorporated.

The discovery of Chestnut Hill iron ore deposits led to the beginning of the iron industry in Columbia. Furnaces were erected in Columbia during the 1840s and 1850s, and rolling mills were added shortly thereafter. The prosperity during the mid part of the nineteenth century resulted in a doubling of the borough’s population between 1830 and 1850, growing from 2,046 to 4,140 persons.

During the last half of the nineteenth century, Columbia’s industry changed. The iron furnaces were shut down with the depletion of the Chestnut Hill iron ores. Eventually, the rolling mills ceased operations. The canal operations waned due to the increased use of the railroads. The lumber industry declined as the surrounding woodlands were depleted, and log rafting was replaced by railroads, which could haul lumber greater distances. These industries were replaced by the rise of the textile and other industries. Factories producing silk textiles, stoves, baked goods, and machinery were established in the borough during the late 1800s.

The twentieth century brought in a period of economic change. The railroad facilities were moved to the Enola (PA) Yards. During this century, while surrounding suburbs experienced rapid job creation, the borough lost a significant portion of its once large industrial base. This resulted in a semi-depressed economic climate in the borough, presenting new challenges for local officials. 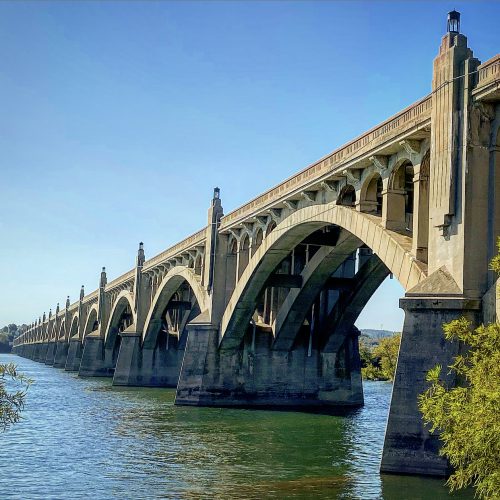 Today, as the twenty-first century begins, there is a renewed commitment to the economic health, welfare, and development of the borough. To better preserve its historic architecture, a historic district was recently established. The Columbia Historic District takes in approximately 950 structures spread over an area that incorporates about one-third of the borough. While aiming for the future, Columbia is proud of its past and remembers its founders by naming streets in their honor.

Today, the town’s outstanding architecture is recognized in the National Historic Register in Washington, D.C.

From the Historic Preservation Trust’s 2019 Columbia Architectural Tour. Click here to purchase a hardcopy of the 76-page publication.