The beautiful mansion house and several outbuildings are all that remains of the colonial iron plantation known as Windsor Forges. Windsor’s two forges were located on the eastern branch of the Conestoga south of Churchtown.

In 1732, John Jenkins received a land grant of 400 acres from the Penn Family. In 1742, this was sold to the owner of Reading Iron Furnace William Branson, who established the lower forge and built a small home, which is the eastern part of the mansion today. In 1765, the ornate western portion of the mansion was constructed by Lynford Lardner, son-in-law of Branson.

Architecturally, Windsor Forge Mansion provides an excellent example of features uncommon in Lancaster County. The gambrel shaped roof on the western section of the north facade is not found very often in residential construction. A floor plan progressing on a horizontal axis, only one room deep at any point on the first floor, is also not typical. These features are both decidedly English and show the Welsh influence of the early founders of Windsor Forge.

Looking at the north facade, the current day stone building was built in three sections. The easternmost part, constructed in 1742, is two bays wide consisting of a door and a window below with two windows above. The largest section, located on the west end, was constructed in 1765. It is five bays wide with a door in the center of four windows on the first floor with five windows on the second floor. The first floor windows of this section have a header of a soldier course of flat arched stones. The two sections of the building were connected in 1815 when a new section that is very sympathetic in scale and fenestration to the 1742 section was added. 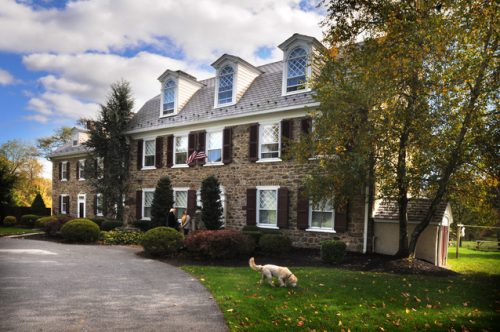 The woodwork, in general, reflects the Federal style of the 1815 renovation except for the window sash and southern facade porches, which date from renovations in 1899. Few items remain of the woodwork from the 18th century.

The mansion’s two main wings are rectilinear in plan and two-and-one-half stories in height. The western section’s rooms have higher ceilings; therefore, it is taller in exterior height. In 1899, the upper sash of all the windows on the north and south elevations of the mansion proper and all the rectangular transoms above the exterior doors were replaced with a diamond lattice pattern. The lower sash of the same windows was made two panes wide at that time.

The cornices on both the eastern and western sections are comprised of the same Federal style moldings. The only difference is that on the western wing, the second major section of the cornices overhangs the lower sections more than on the eastern section. Starting at the bottom of the first section, the wood molding shapes are a flat, a cove, a flat, an ogee, and a flat. The second section is a half-round, a broad cove, and a large ogee. Wooden brackets, added in 1899, terminate the ends of the cornice on each wing. The roofs were also extended 18 inches beyond the gable ends at that time.

There are four brick chimneys on the north facade, one on the eastern sides of both the 1742 section and the 1815 section, and one on either gable end of the section built in 1765.

The main entrance is on a very grand scale. It is an excellent example of the crisp, delicacy of the Federal period’s Neoclassicism. The pilastered entrance supports an arched top that frames an arched transom above the six-panel door. There are three large dormers in this section with horizontal, clapboard sides. The dormers have arched windows, framed with Federal style pilasters which support their gable roofs. On the eastern end of the north facade, there are three smaller, gable-roofed dormers with double-hung windows. There are three raised panels in the shutters on the first floor windows and louvered shutters on the second floor windows.

In 1773, David Jenkins purchased the property. As the ironmaster, David (1731-1797) and his wife Martha were prominent citizens. David was a leading patriot during the Revolution and supplied materials from the forges for the war effort. His son Robert (1769-1848) helped suppress the Whiskey Insurrection in 1791. A Federalist, he was elected to the Pennsylvania House of Representatives from 1804 to 1806 and the United States House of Representatives from 1807 to 1810. Locally, Robert and his wife Catharine Jenkins provided the land and money for the building of the Caernarvon Presbyterian Church, now the Caernarvon Historical Society, another stop on our tour.

Robert Jenkins managed the forges from 1799 until his death in 1848. This was the most productive era for the forges and employed 30 men and boys. In 1850, the forges closed for several reasons. His son was not interested in the business. There was a scarcity of charcoal, and more modern coal-fired methods had been developed. Finally, the water power on the Conestoga was diminished due to the increase in mills. 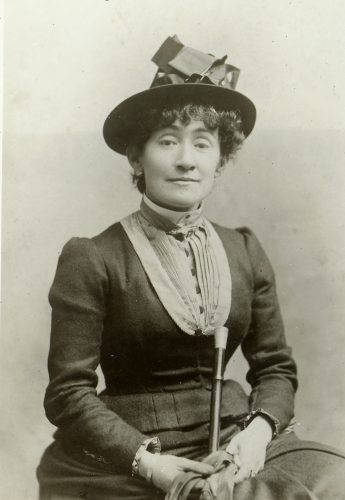 The 1899 changes to the mansion were due to Blanche Nevin (1841-1925). Blanche, granddaughter of the Jenkins and daughter of Franklin & Marshall College president John Williamson Nevin, was a professional artist. She spent half a year in Europe and the summers at Windsor Forge. In addition to painting and writing poetry, she was one of the few women sculptors of her time to receive major commissions. Her marble bust of Revolutionary War General Peter Muhlenberg was placed in Statuary Hall in the Capitol Building in Washington, DC. in 1907. Her famous bronze bust of Woodrow Wilson in the Capitol building was copied many times. The lion fountain in Reservoir Park and the horse trough at the intersection of Orange and King are her sculptures in Lancaster. The location of the other half of her work is unknown. Several of her sculptures were placed on the grounds. The Buddha is now at the University of Arts in Philadelphia. The two lions at the front door still welcome visitors to Windsor Forge.

The present owners are the first non-family owners of the property. They purchased it in 1998 and immediately began the restoration. In addition to making the house structurally sound, they removed the stucco and repointed the home. Some window panes were replaced with glass from the tenant house windows.

Several outbuildings related to the domestic life of the mansion date back to 1765. These include a detached summer kitchen, a springhouse in ruins, a smokehouse, and a tenant house on a neighboring property.

Windsor Forge was placed on the National Register of Historic Places in 1989 because it is important in the architectural history of Lancaster County. The house is one of the finest examples of a traditional English house, one room deep at any point. The Federal style woodwork of the 1815 renovation is of high quality and interesting design. The property is also significant because of its place in the manufacture of iron in the late 18th and early 19th centuries and as the home of artist Blanche Nevin.

This is an excerpt from the Historic Preservation Trust of Lancaster County’s 2012 Architectural History Tour Hidden Treasures 1 book.