The Caernarvon Historical Society building was built as a Presbyterian church in 1843 and used for that purpose for a short time, Other groups used the building after that, but it eventually fell into disrepair. The building was restored by the Caernarvon Historical Society in 1976. The structure we see today contains most of the original materials and features. 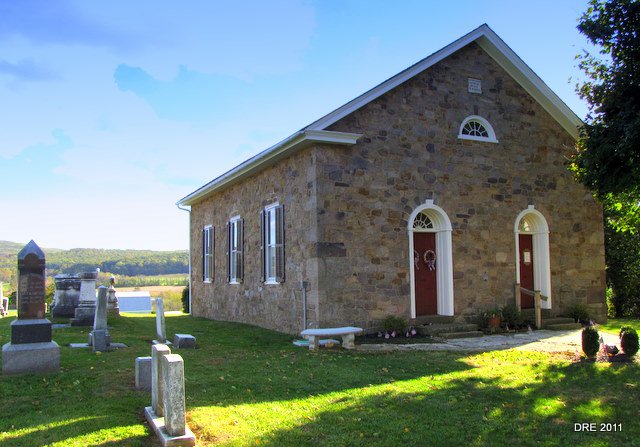 The former church is constructed of a combination of limestone, ironstone, and sandstone fieldstone of varying co!ors and textures set in a generally horizontal patchwork coursing. There are cut stones forming the arches above the front windows and the transom window. Large stones, a few cut in an ashlar style, are used as quoins on the four corners of the main building.

The lower quoins on the northwest corner of the front are especially pronounced. More sharply cut than the other quoins, they are sandstone, which has a darker, red-brown color. They almost look as if they were re-used, or intended for another, more formal style building.

These cornerstones are a significant feature of the building. They provide a sense of solidity and stabi!ity to complement the smallish, random pattern of the majority of the stonework. The pointing mortar was applied in a beveled, raised-joint style. It is a tan color and has a sandy finish.

The building is a simple rectangular shape. The north elevation is two bays, but the east and west facades are three bays wide. The rear, or south facade, is broken into three bays, and there are no windows on this elevation. However, there is a projection on this facade for the pulpit area. 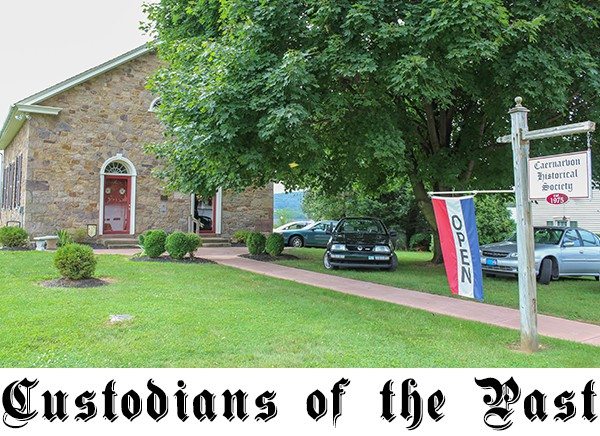 The north-facing front facade features the date stone reading “Caernarvon Church Built 1843” above the window near the peak of the gable. Each of the two deeply set arched doorways has a pair of narrow, four­panel, raised panel doors that are painted a rich red-brown. The wood frame is essentially a barrel vault shape of curved boards and is painted white.

A keystone breaks the outer molding of the trim. The fanlights above the doors have two arcs of panes in a staggered design. The outer arc has seven panes, and the inner, smaller radius arc has six. A high fanlight window is between the doors above the eave line. Six panes form an arc above two quarter-circle panes. This splits the window in half visually. There is no wood keystone on this window frame. However, the arch which forms the window opening in the wall is made of tapered stones. 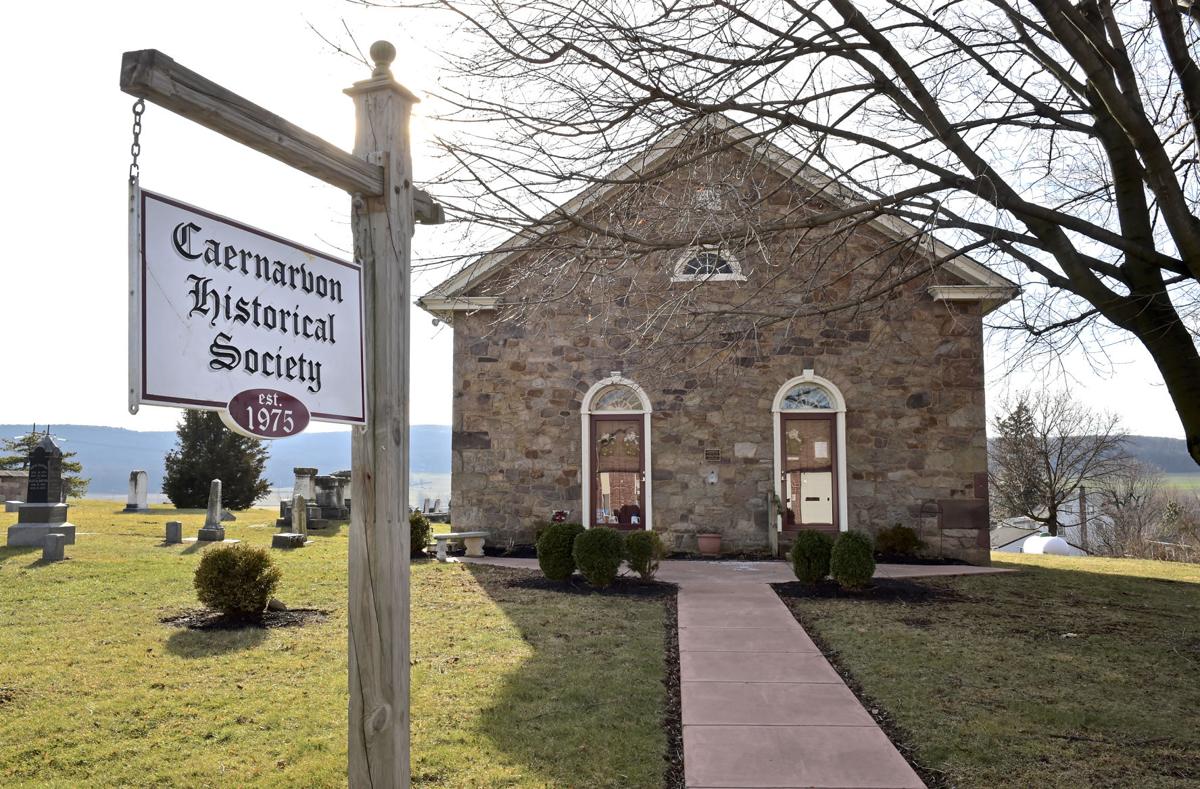 The central, or keystone position, has a darker red-brown colored stone. This use of color in the stonework is both subtle and visually strong.

The three symmetrical windows in the east and west facades have nine­-over-nine lites in a wood sash. All these windows have shutters. The windows and trim are painted white, and shutters are the same red-brown as the front doors.

The south-facing facade has the full height central pulpit element projecting southward approximately five feet from the south face of the building. The original pulp!t remains in this area. This feature has a small four-over-four double-hung window on the east face at the first-floor level. There are a wood board and batten door which leads into a partial crawl space. There is a similar door directly above it in the wood-framed gable end. This provides the only access to the attic.

The roof is moderately sloped and has machined wood shingles. There is a deep roof overhang and soffit at the front which is connected with a cornice return and continuing on the sides. The rear facade has a similar cornice, with no projection.

The Caernarvon Presbyterian Church was constructed in 1843 and incorporated in 1846 as part of the Donegal Presbytery. The land for the church and the cemetery was donated by the owners of Wi Windsor Forge, Robert, and Catharine Carmichael Jenkins, In fact, Catharine Jenkins established a Trust Fund for the continued maintenance of the building. The interior carpenter was William Buchanan of Honeybrook. Church services were conducted every third Sunday afternoon by the pastor of the Cedar Grove Presbyterian Church near Blue Ba IL Bible study classes, conducted by church members, were held each week. The Presbyterian church closed about 100 years ago.

The Caernarvon Historical Society was established in 1975 to promote interest in the history-rich Township of Caernarvon. The Society was able to restore the former church building in time for the Bicentennial in 1976. The floor was repaired, and the walls were replastered. Some of the pews were removed, but are stored in the attic Display cases were added to showcase historical artifacts of Caernarvon Township. In 1979, the building was dedicated as the Society’s headquarters.

In 2004, the Donegal Presbytery donated the property to the Historical Society and presented them the keys at a dedication ceremony.

The Society sponsors a variety of events including regular business meetings in the Caernarvon Historical Society building on the second Wednesday of the month at 9:00 a.m. The Society is open normally on Wednesdays from 9 am to 5 pm (Hours may vary due to COVID-19). The organization also features guest speakers and a new program called “Let’s Talk History”, which is held the fourth Wednesday of each month at 7:00 p.m. Another part of their mission is the growth and development of the archives of the Society, which are housed in the former church.

Through adaptive reuse of the former church building, the Caernarvon Historical Society has preserved the historical character of this Churchtown landmark and is sharing it with residents and visitors to the area.

For information about the Caernarvon Historical Society, visit their Facebook page.