In the 1700 and 1800s, Lancaster County was an important milling center due to the availability of water power along our many streams. The first, and most active mills, were located along main roads. Actually, some of the first roads in the county were constructed to provide easy access to mills. 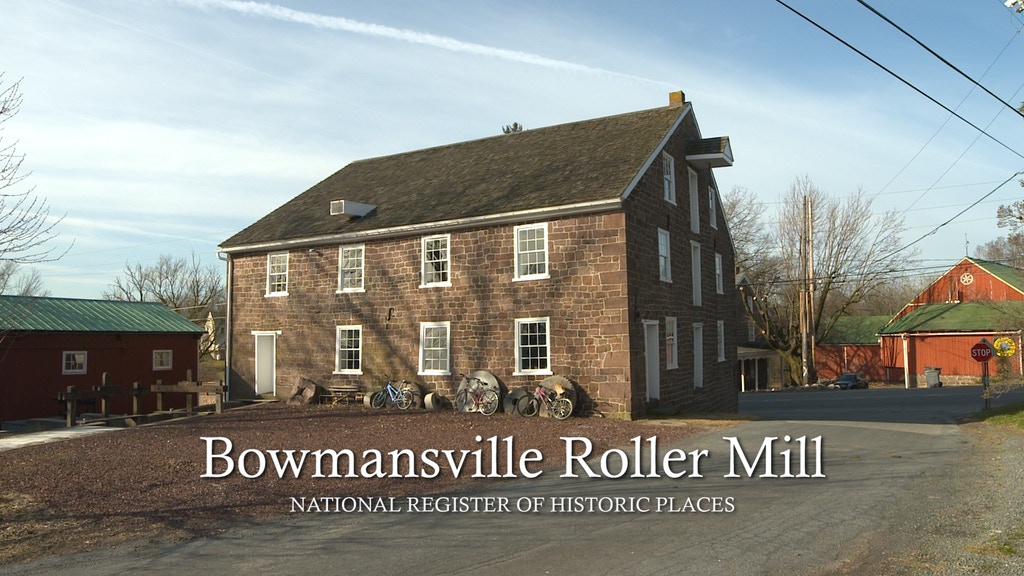 The Bowmansville Roller Mill is an important example of this industry. It provided the farmers in this area with both animal feed and flour. It is the last remaining example of a combination f grist and sawmills in Brecknock Township. Machinery from the 1850 grist mill and the 1888 roller mill are fully intact. It is the only known mill in the area to have both still. 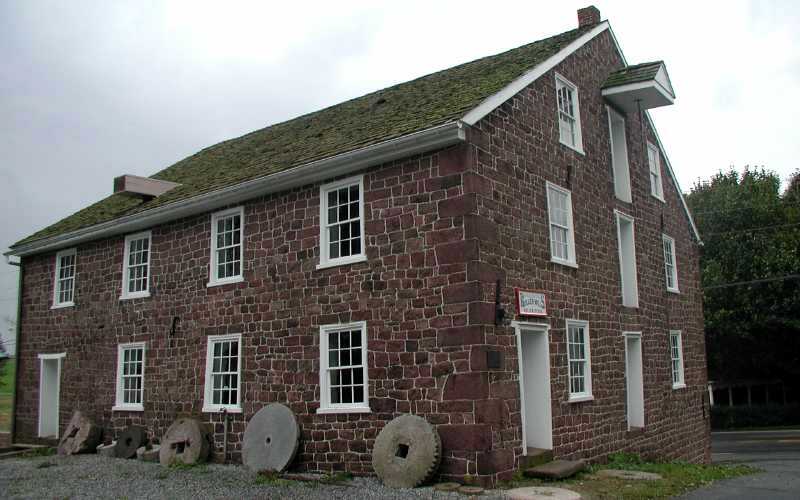 Constructed of local brownstone in 1850, the mill is three-and-a-half stories high. The rectangular building measures 45 feet by 50 feet five inches. A mixture of square and rectangular shapes, the stones have natural edges with a weathered, textured face. All of the corners of the building have large quoin stones.

The pointing mortar is a raised beveled ridge profile, which is off white in color. The recessed wood doors are four-paneled Dutch doors with reeded frames. Keystones are used in the center of the flat lintels above the windows at all levels except the uppermost at the eaves. The wood windows have six-over-six double-hung sashes with reeded frames. All the doors and windows are painted white. 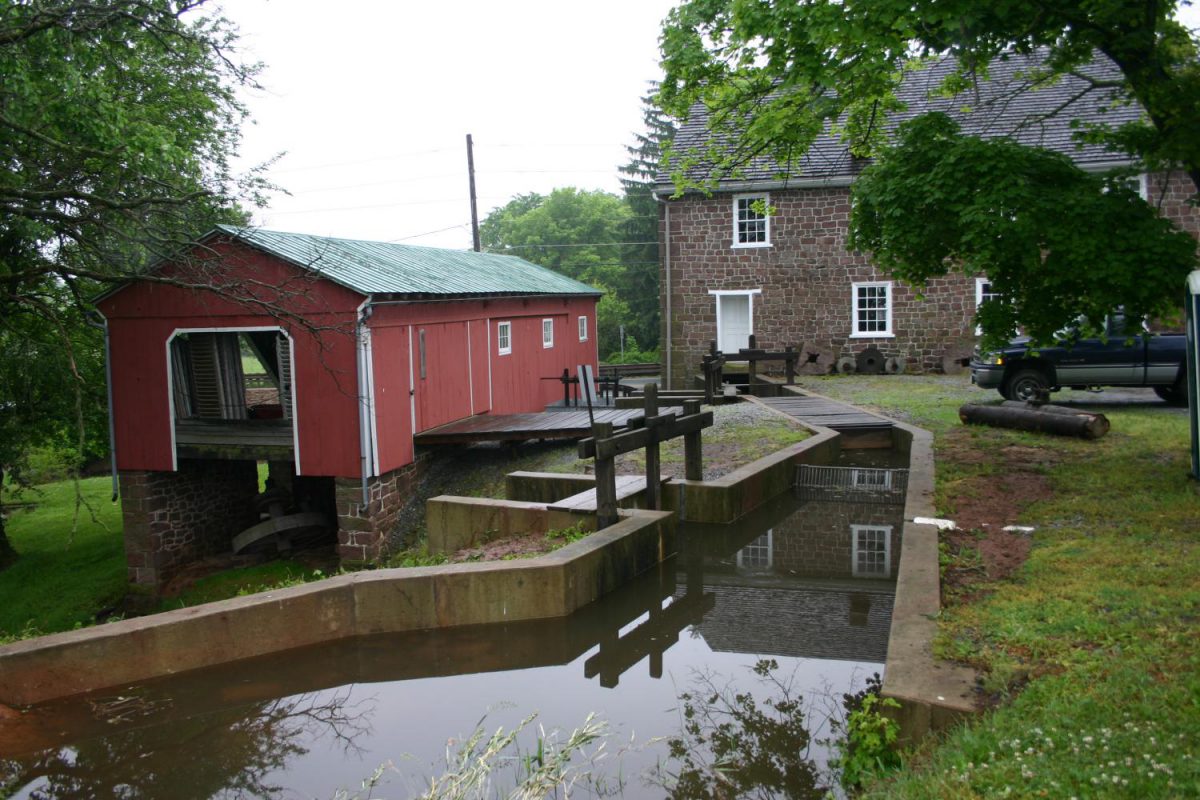 The north and south facades are three bays wide, and the east and west elevations are four bays wide. The gabled roof has hand-split wood shingles. There is a small brick chimney at the north end. 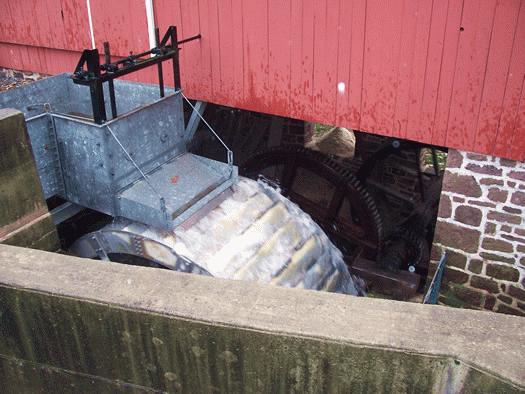 The north-facing facade is three-and-a-half stories with the same door placement at the second, third, and fourth levels of the mill. The first floor entry is just east of the first bay. There is a hoist with a gable roof overhang above the highest door.

The south-facing elevation is actually four-and-a-half stories. The basement, or water wheel level, is exposed. There is a door at the second, third, and fourth levels in the central bay. It is flanked by one window on each side and a small single-pane square window above the highest door. Two arched openings are on either side of the central bay, offset between the doors and windows. 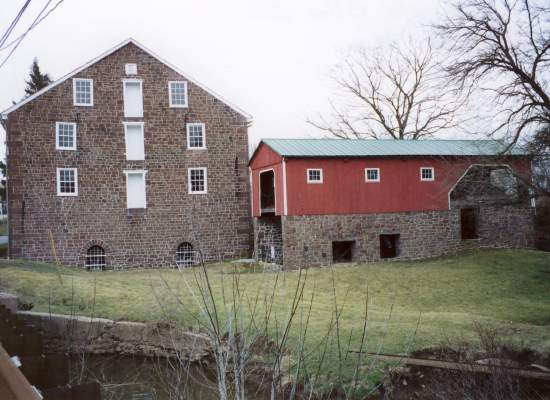 The west-facing elevation, located quite close to Route 625, Is four bays wide and has three levels of windows. There is a door at the lowest level in the second bay from the north.

The east-facing facade is built into a bank. It is four bays wide and has two levels of windows. There is a door at the ground level on this side, which Is offset between the southernmost bay and the corner. A small boxed hoist extends from the roof on this elevation. 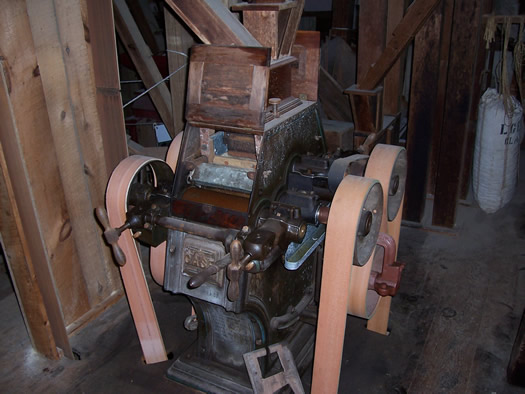 The mill contains examples of three centuries of milling techniques: the millstones, the roller mills, and the sawmill. There are four sets of millstones. The French burr millstones are from France.

They were created in segments and held together with an iron band. The burr, or groove pattern, incised in the stone, was designed to move the grain towards the outside of the stone as it was ground. These stones were used for corn and wheat. The roller mi!!s were added in 1888. Known as the Case Automatic Feed, the two stand gradual reduction roller mill varied the grind from coarse to smooth to pulverize the wheat and mill it into flour. 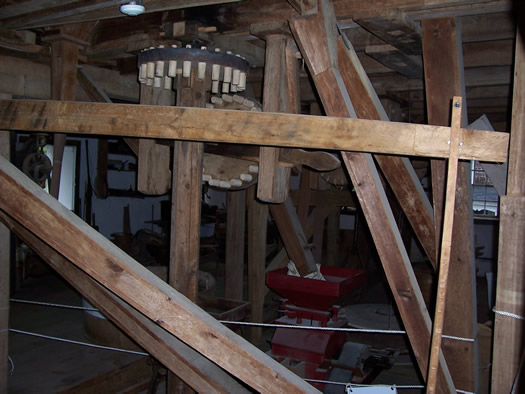 The Bowmansville Roller Mill was both a custom and a commercial mill. Some of the farmers had their grain milled and returned to them. However, other loads of grain were purchased by the Von Niedas, milled, and bagged. These large bags of flour or feed were then bought by farmers and other people in the area as needed. 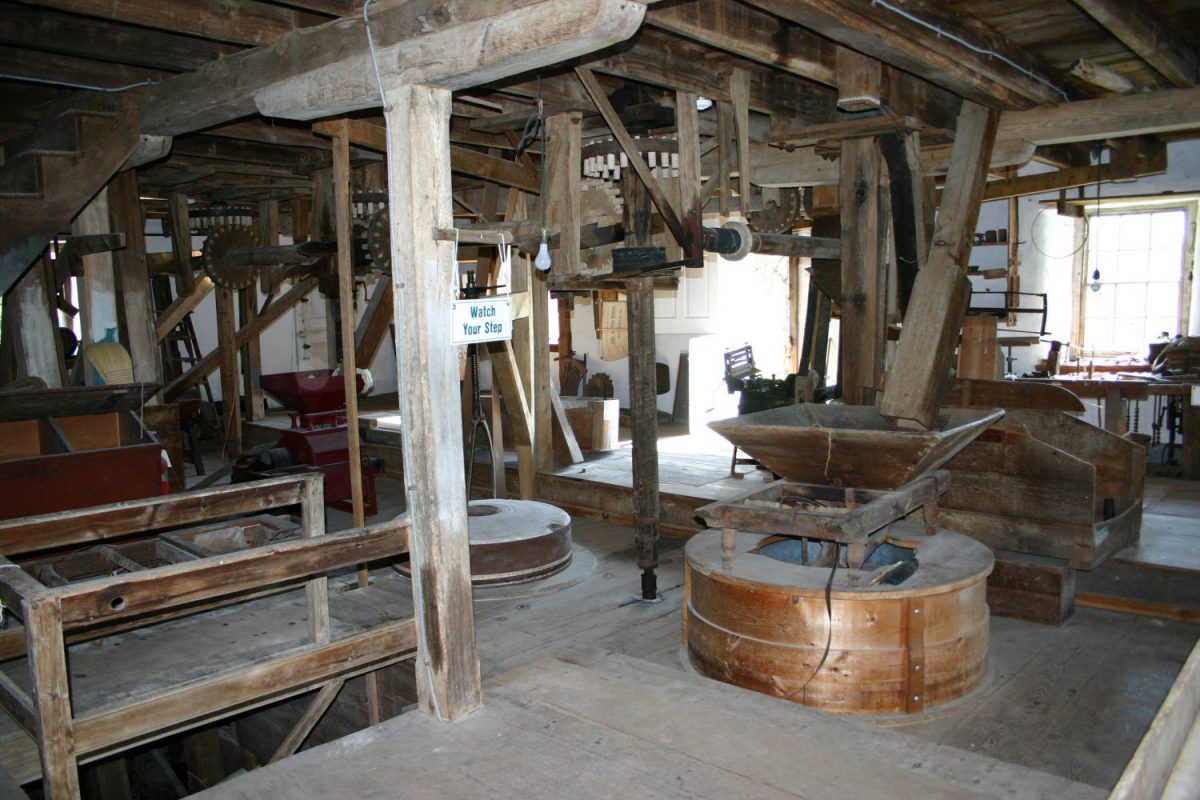 When the water level in the millrace was high and the harvest was plentiful, the mill ran almost continuously. During the three or four months of harvest, the farmers brought their grain to the mill by the wagon load. There the grain was loaded into barrels and lifted by pulley to the assigned compartment, or storage bin, on the upper levels of the mill. Several days later, the farmers returned to the mill for their grain. 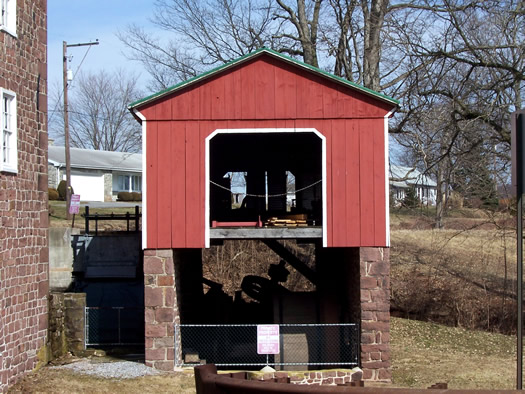 In 1737, the first settler in the area, Christian Good, constructed a log building to house both a grist mill and his home at this location. The first Mennonite religious services in this area were held in his home. Descendants of the Good family ran the mill until 1846.

In 1846, Henry Von Nieda (1 825- 1883) purchased the property. In 1850, a portion of the mill was damaged by fire, so he built the present stone grist mill on the original mill site and the neighboring home and tenant house. The sawmill was added to the property in 1860. He ran the mills until he died in 1883. 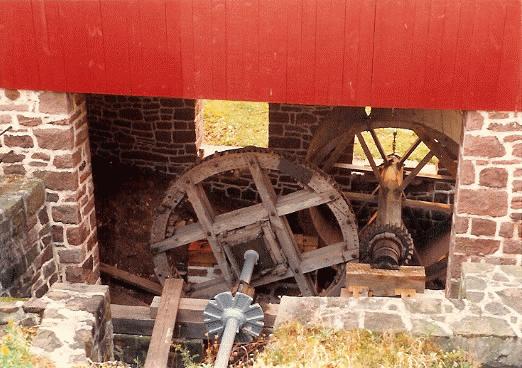 At that time, his son John Adam Von Nieda (1 860-191 2) inherited the mill. He operated the mill until 1912 when he was fatally injured because his clothing was caught in the shaft of the mill. Henry Franklin Von Nieda (1 884- 1970), John’s son, ran the mill from 1912 to circa 1945 when he closed both the grist mill and the sawmill due to a dwindling demand for the products. By that time, village mills could not compete with larger, steam-powered mills.

The Bowmansville Roller Mill was placed on the National Register of Historic Places in 1987, which recognized the preservation efforts of former owner Stewart Kean, who restored the mill with local men. However, there would not be enough water to run the machinery today without the early intervention of Henry Franklin Von Nieda. When the Turnpike was under construction, he convinced the Turnpike Commission to let the headrace flow through culverts under the turnpike.

Learn more about Bowmansville Roller Mill by watching this video.

This film is an award-winning documentary about the historic and fully operational Bowmansville Roller Mill, located in Eastern Lancaster County. The Mill has a mile-long millrace and is both a grist mill and a roller mill. It is on the National Register of Historic Places. With all its operating machinery, which includes 2 roller mill stands, grist stones, and a sawmill, this documentary presents the Mill in all its glory as well as issues associated with historic preservation. The documentary is narrated by Ron Funk, the Mill’s owner, The Bowmansville Roller Mill is opened 4 times a year for public demonstrations. 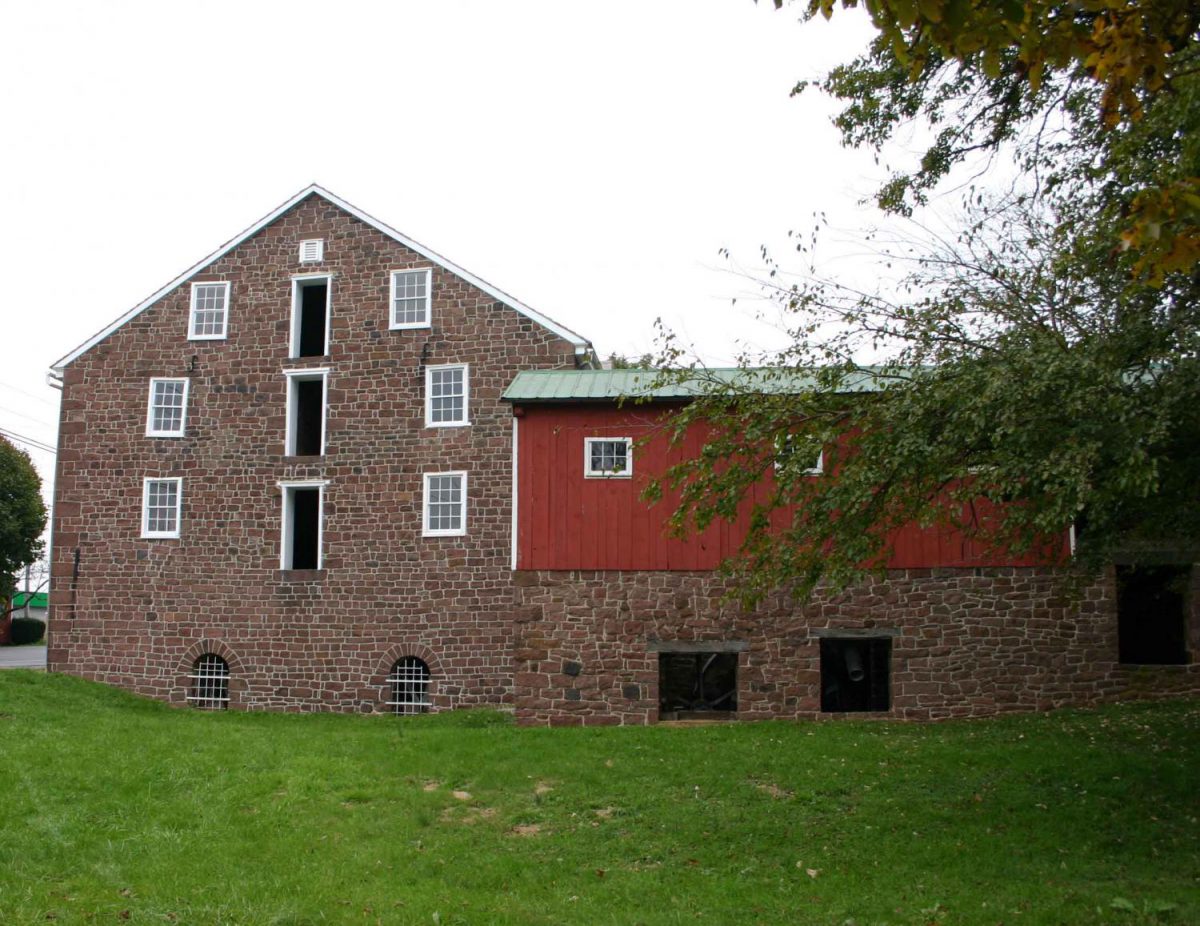