For more than 45 years, the prolific C. Emlen Urban created many of the historic landmarks that are fundamental to the beloved character of Lancaster City. In this post, we will examine Urban’s 1908 West Chestnut Street church.

The Unitarian Universalist Church, located at the corner of Chestnut and Pine Streets, is a neighborhood church reminiscent of an English country chapel. The structure demonstrates Urban’s ability to design almost any style while adapting modern building influences. 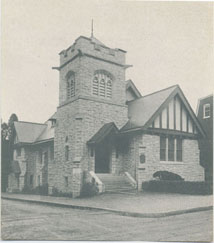 Built primarily in the Norman Gothic style, the church shows detailing influenced by the Arts and Crafts Movement, which was just beginning to gain favor in America. The church is built of Atglen stone with box mortar joints. Although Urban had initially proposed the use of brick or sandstone, Milton T. Garvin, the church’s chief financial backer, insisted on a stone that reinforced the appearance of an English parish church. 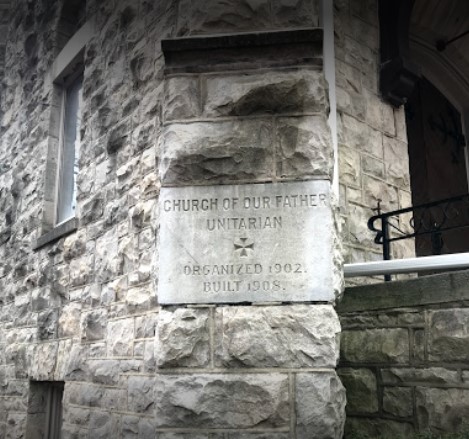 Several elements that are hallmarks of the Arts and Crafts Movement are the tall one-story scale, the half-timbering in the gable along Chestnut Street, and the carved bargeboards hanging from 1908 the projecting end of the roof to conceal the gable. Other Arts and Crafts influences are seen in the brackets and modillions. They emphasize the rich tones and grains of the wood used for their construction. The main entrance is at the base of the tower on the northwest corner. It features a pair of doors in a chevron detail. It has hand forged flora influenced hardware and a squarely proportioned light. All these details demonstrate the influence of the craftsman over the mass-produced materials of the Victorian Age.

The original building was devoid of the stained glass windows and had a plain interior. The church installed the stained glass in the 1920s. The Arts and Crafts Movement sought to relate the moral and social health of a nation to the qualities of its architecture and design. This was a mantra embraced by Urban.

The Affirmation of Faith of the UUCL is: Love is the spirit of this church, and service is its gift. This is our great covenant: to dwell together in peace, to seek the truth in love, and to help one another. Today the Unitarian Universalist Church of Lancaster has a membership of over 600 adults and children. 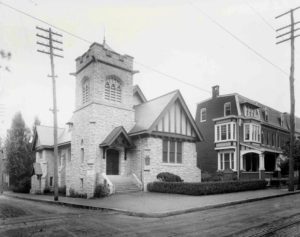