For more than 45 years, the prolific Urban created many of the historic landmarks that are fundamental to the beloved character of Lancaster City. In this post, we will examine Urban’s 1929 West Walnut Street structure.

It is in the Gothic Revival style. Urban employed the classic facade design device of base, middle, and cap sections to create a sense of proportion and to organize the height and mass of the building. There are only two materials utilized in the exterior – a rough-textured tan-gold colored brick and cut stone. 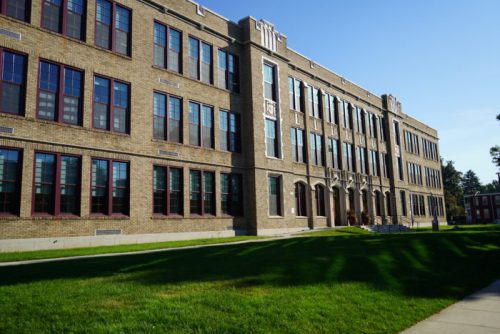 The base level of the facade is distinguished by arched openings in the central portion of the main facade. The pilasters are topped with simple sloped caps. The top of the base section is marked with a continuous, two-part, small stone cornice.

The middle portion consists of two stories of paired windows and two-story pilasters topped with sloped caps. On the east and west elevations and in the north wings of the building are two-story brick panels with a projecting diamond pattern. The panels are outlined in a width of stone and bordered with a wide brick band further edged with a soldier course. The whole panel is slightly recessed. The patterned panels enliven the windowless wall surface and further identify the tall middle section of the facade. This 1927-1929 two-story section is topped with a larger cornice of cut stone. At equal intervals around the entire perimeter of the building are floral faced brackets in the cornice.

The cap section is a brick parapet wall broken at intervals and trimmed with cut stone with angled faces. The light color draws attention to the top of the building.

The primary facade along Walnut Street is 21 bays long and organized side to side into five distinct symmetrical groupings.

Two unusual features found inside the school are the cafeteria and an airshaft. The cafeteria is on the third floor and features an interesting art deco tile design around the water fountain. In addition, the interior of the building includes a structural airshaft, a vertical opening within the building. Windows in the airshaft provide both sunlight and ventilation. 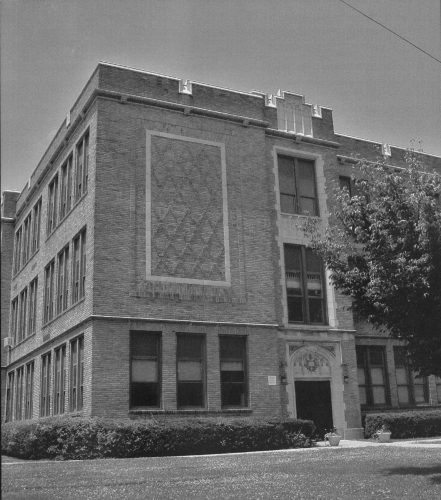 The Lancaster Board of Education built Reynolds Middle School (formerly West Junior High) and Hand Middle (formerly East Junior High) at the same time. Each school cost $894,928.70 and had identical interior features. The schools were dedicated a day apart. The West Junior High dedication was on February 22, 1929, and over 1,000 people attended. The mid-year class donated $42 to the school for the purchase of a motion picture machine
for use in the visual education and library classroom.

Following the opening of these two schools, an editorial in the Lancaster New Era encouraged the Board of Education to “plan another modern school at once, so the children of Lancaster do not have to be educated in barns, basements, churches, or part-time ever again.”

In July 1939, the Lancaster School District changed the names of their schools to honor famous educators, military figures, and politicians. The West Junior High was named for John Reynolds. A local man, Reynolds was a career Army general who fought in many key battles of the Civil War. He was killed on the first day of the Battle of Gettysburg.