The Dam at Safe Harbor

The original portion of the Safe Harbor plant is representative of early modern industrial design. Taken from the tradition of grand halls, markets and train stations, the building is designed with a sense of strength, interior openness, and verticality. The building is functional, as expressed in the large open hall of the turbines. This is a soaring space, filled with light from the 60 feet high windows facing south on the river. 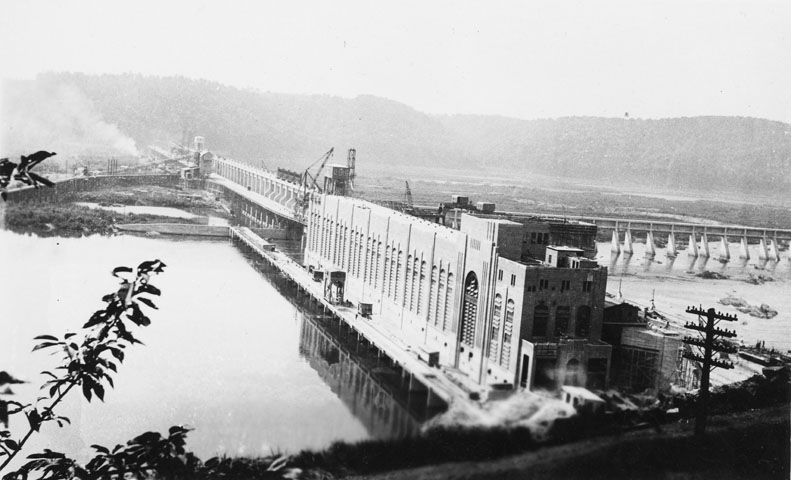 There are 8 bays of 3 window units each, to the west of a taller, wider bay with a single full light window unit. To the east of this anchoring element, are two more tall bays and a lower 2-story entrance bay attached. The 1986 addition, though equally functional from an operating point of view, is designed with two levels of individual window units and, as such, loses the soaring quality of the original building. 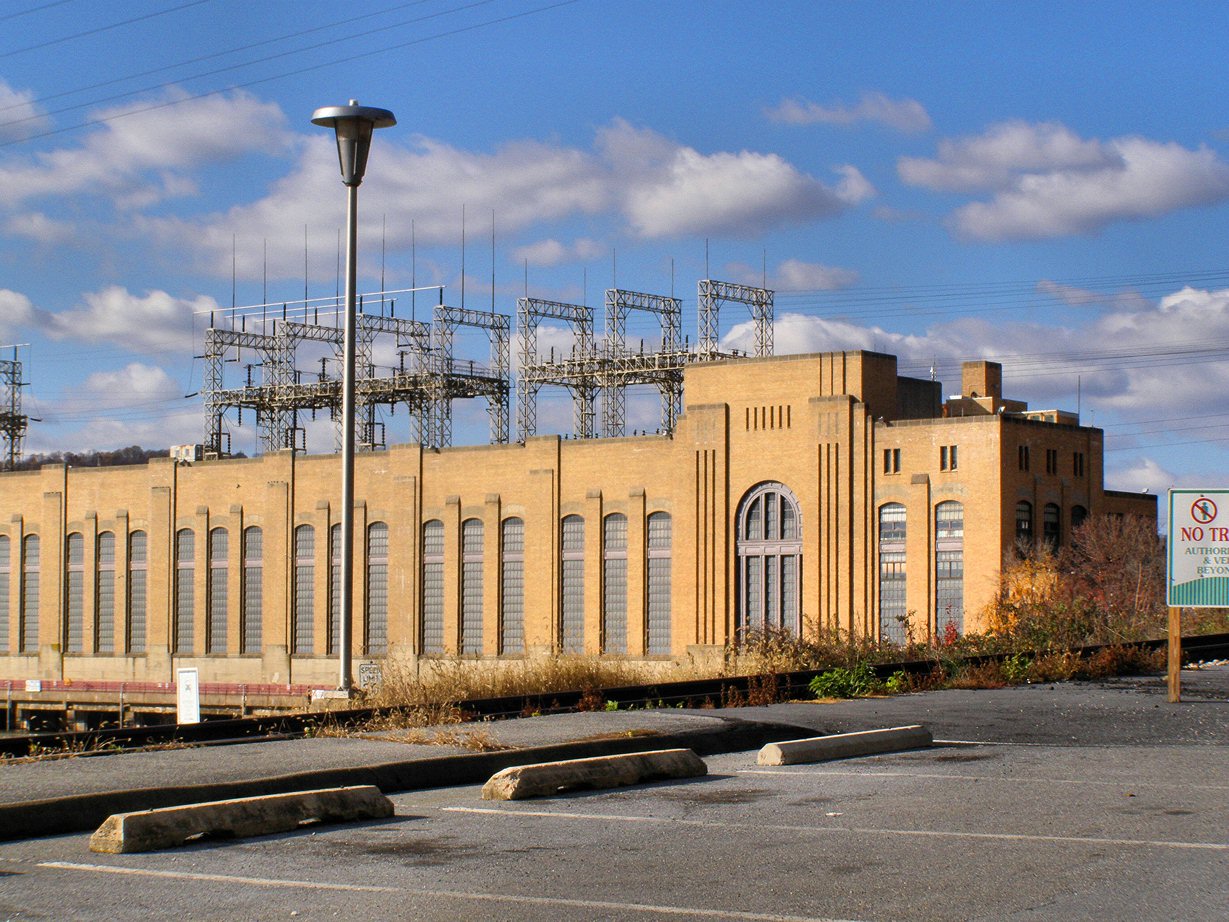 Both were built of the ochre-colored brick and the bays area defined with salient piers. The upper heads of the windows of both structures align and create a sense of continuity despite the differences in architectural expression.

The primary bays of the original structure have shallow arched openings, the arches being a cast concrete, which creates a distinct articulation of the windows. The large taller bay toward the east end has a full half-round arch opening and projects slightly from the face of the western length of the building, emphasizing its architectural and functional prominence as the connecting link between the plant and the office and support facilities. 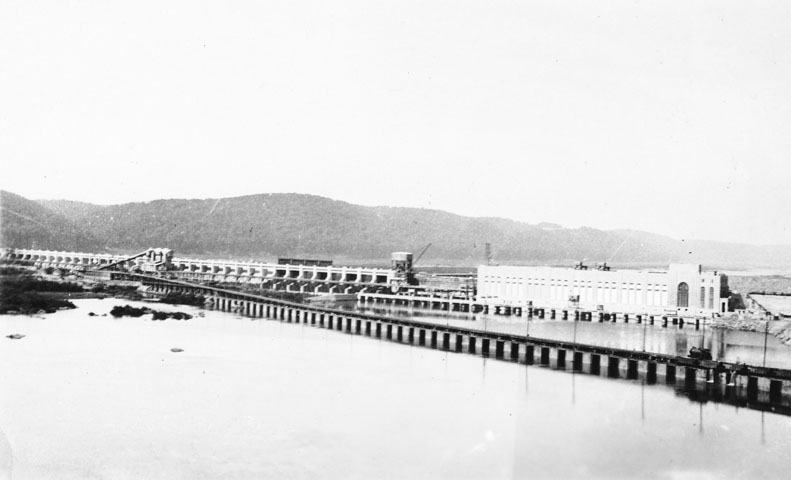 The area we now call Safe Harbor was important to the Indians and traders of the 1600s, and to the European settlers that arrived in the early 1700s. Fishing and farming were early occupations.

Old deeds and records for land along the west bank of the Conestoga near its mouth refer to sales in “Millersport, commonly known as Safe Harbor.” Millersport, however, did not persist as a place name, and the area on both sides of the river has continued to be called Safe Harbor. One theory is that the name Safe Harbor refers to the deep waters of the river where the Conestoga flows into it, providing a “safe harbor” for the arks and rafts whose crews had successfully passed Turkey Hill. These travelers were glad to reach the comparative quiet of the creek for a rest before facing the dangerous rapids below the Conestoga.

The name Safe Harbor first appeared in public print when a notice by Adam Fogle, Jacob Eshelman Jr., and Henry Brackbill was placed in the Lancaster Intelligencer & Weekly Advertiser in 1808. It reported the erection of “a large and commodious Storehouse on the Bank of the Mouth of the Conestoga, called Safe Harbor.”

The practice of moving cargo clown river only, and restricted to periods when the river flow was high enough to make passage possible, could not meet the demands of the expanding economy. An endeavor was established to provide two-way navigation.

Construction began in 1802 for a canal system & locks large enough to accommodate log rafts, as well as, ark and keelboats. This system was in service for about 30 years. Plans were made for nine lock-clam combinations to take care of the 63 feet total lift in the 18-mile stretch from Lancaster to Safe Harbor. The operation started in 1828, but with several closures. In 1840 regular operation began again. Following other canal-lock installations on both sides of the river, the combined project became known as the Susquehanna and Tidewater Canal. The canal system ceased operation following flood and ice damage and with the advent of railroads.

Safe Harbor Iron Works added industry to the area and produced rails for the expanding railroads in the state. The iron works continued running steadily until 1865, when the dam across the Susquehanna River, which connected the Conestoga Canal with the Tidewater canal, was destroyed, cutting off the principal means of access and use.

The period 1885 to 1904 was relatively uneventful except for the brief operation of the Safe Harbor Match Factory. Adolph Segal of Philadelphia bought the Iron Works in 1894 and installed equipment in the old rolling mill for the manufacture of blue-tipped phosphorous matches. Employment was provided for many men who had been idled by the second closing of the Iron Works. Photographs reveal that the payroll included a large portion of women and children. Operations ceased in 1899.

Safe Harbor Rolling Mill was so large it covered over an acre of ground.

When the first passenger train rolled to a stop at the tiny station on July 1, 1877, Safe Harbor was placed on the nation’s railroad map. This rail line carried in much of the materials and heavy machinery used in the construction of the Safe Harbor hydroelectric project. 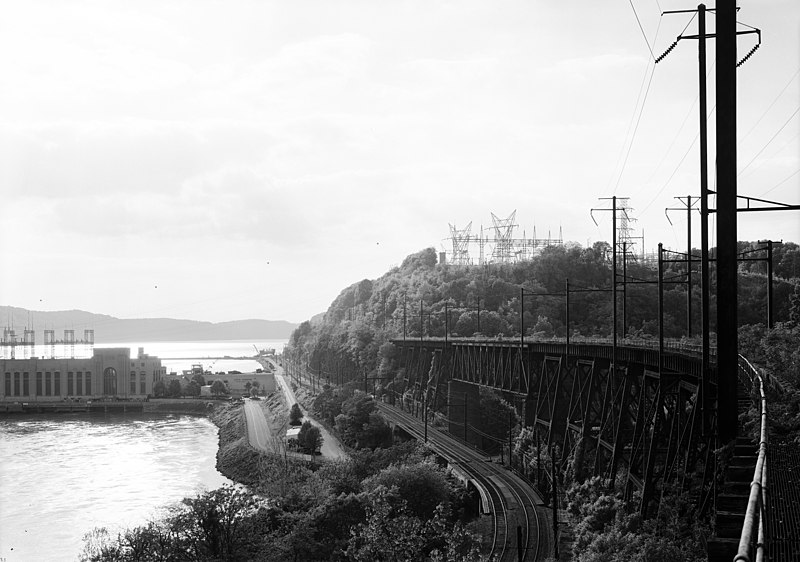 The other railroad that enters Safe Harbor is the Atglen & Susquehanna Branch of the former Pennsylvania Railroad. Locally, it is known as the “Low Grade Line,” though it occupies “high ground” in the Safe Harbor area. This line is now proposed for a public Rail Trail. Safe Harbor came into being as a result of evolution in the nation’s electric generating industry and from the activities of the early risk-taking developers on the Susquehanna. Careful and thorough planning by dedicated men of the Pennsylvania Water & Power Company and Consolidated Gas Electric Light and Power Company brought the project to fruition.

Actual work in the river began in April 1930. The decision to proceed with the project, despite the stock market crash in October 1929, was a boost to the sagging economy in the local area. It provided much needed jobs and proved to be a prudent move as labor and materials were plentiful, and costs were lower than at any time since.

Construction of a run-of-river hydroelectric facility is unique in that the dam and powerhouse must be built on the river bottom. This feat is accomplished through the use of cofferdams. This requires the un-watering of the stream bed one section at a time so that the bedrock surface can be prepared for the placement of concrete. The station started generating power on December 7, 1931, only 20 months after work was started in the river.

Safe Harbor maintains 2,330 acres available for recreational activities. The Susquehanna River watershed consists of 45.5% of the land area of Pennsylvania and 13% of the State of New York. It supplies 50% of the freshwater entering the Chesapeake Bay.

This was an edited excerpt from the Historic Preservation Trust of Lancaster County’s 2004 Historic Conestoga Township Architectural Tour book. Click here to purchase a hardcopy of this excellent 31-page publication.